Jambukeswarar Akhilandeswari Temple, Thiruvanaikovil (Thiruvanaikal) is one of the Pancha Bhoota Stalams representing the elements of nature – water, which is located on the Srirangam Island – outskirts of Tiruchirapalli (Trichy) district, in the state of Tamil Nadu and with River Kaveri on Southern side and river Kollidam (Coleroon) on the Northern side. This temple is close to Srirangam Temple (Shri Ranganathaswamy Temple), which is considered the root of all the Vaishnava temples. The concept of God probably emerged from the worship of the Mahabhuta or five great elements of nature (also known as Pancha Bhootas) — Agni, Vāyu, Prithvi, Akasha, and Jala. It is intriguing to observe that, in India, Lord Shiva as Rudra, is considered the earliest form of a Deity and has 5 temples worshipping him as a manifestation of the Pancha Bhootas. These temples are collectively named “Pancha Bhoota Sthalas” —  Vāyu Linga at Sri Kalahasti, Agni Linga at Thiruvannamalai, Akasha Linga at Chidambaram, Prithvi Linga at Kanchipuram and Jala Linga at Thiruvanaikaval.

According to the mythological scriptures, Devi Parvathi in her Incarnation as Devi Akilandeswari performed penance in the Jambu forest (Thiruvanaikoil). She made a Lingam out of the water from the River Kaveri, installed it under the Venn Naaval Tree (Jambu tree in Sanskrit or Indian Blackberry in English), and performed abhishekam with the water of the holy river. So, that’s the mythological reason for calling shiva lingam Appu Lingam (Water Lingam). Lord was pleased with her devotion and appeared before Devi Akhilandeswari and taught her Siva Gnana for this reason this temple is also known as Gnanashethram. Devi Akhilandeswari took Upadesa (lessons) facing East from Lord Shiva, who stood facing west. Hence, this Temple is also revered as an Upadesa Sthalam. Thirukalyanam is not performed in this temple (because Devi was like a student and Lord Jambukeswara was like a Guru). As Akilandeshwari worshipped Lord Shiva in this temple, even today at noon the priest dresses like a female and does pooja to Jambukeswarar and also for ‘Go Maatha'(COW). 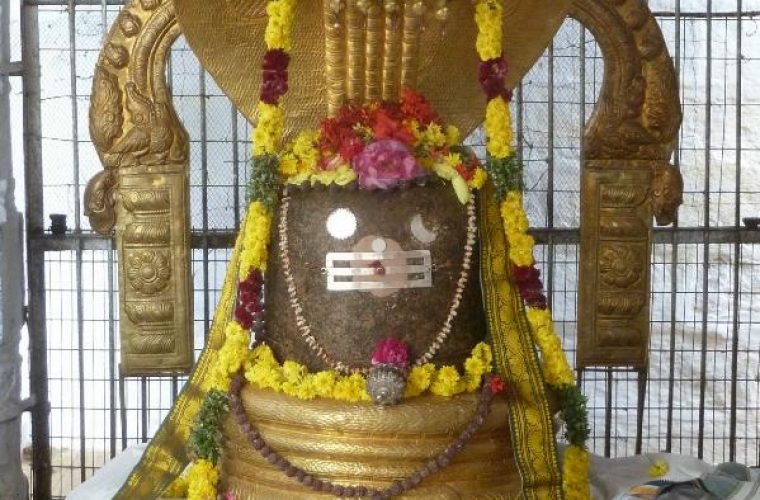 There are two Shiva Ganas (those who live in Kailash) Malyavan and Pushpadanta. Even though both were Shiva Ganas they used to quarrel with each other and fight for one thing over the other. In one of their fights, they mutually cursed each other- one to be born as an elephant and another as a spider on earth. Both came to Jambukeswaram as the place was called earlier and continued their worship of Lord Shiva. The elephant used to collect water from the River Cauvery in its trunk and performed abhishekam to the Lingam under the Jambu Tree. The spider spun a web over the Lingam to prevent dry leaves from dropping on it and also from sunlight directly falling on it. The elephant used to destroy the web as it thought that it was dust and used to clean the lingam by pouring water. This happened daily, but one fine day the spider was enraged due to the fact that the elephant is destroying the web and it crawled into the trunk of the elephant and bit it to death, killing itself. The Lord is the form of Jambukeswarar moved by the deep devotion of the two relieved them from their curse. As the elephant worshipped here, this place came to be known as ‘Thiru Aanai Kaa‘ (Thiru- Holy, Aanai- elephant, kaa(Kaadu)- forest). Later the actual name, ‘Thiruaanaikaa’ became ‘Thiruvanaikaval’ or ‘Thiruvanaikoil’.

As an outcome of committing a sin by killing an elephant, the spider in the next birth was to be born as King Kochengannan Chola (Kochengannan Cholan meaning Red-Eyed King) and he was responsible for constructing as many as 70 temples, and this temple is believed to be his first. Remembering his enmity with the elephant in his previous birth, he constructed the temple, ‘Sannathi’ (Sanctorum) in such a way that not even a baby elephant can enter. One has to bend to enter the Sanctorum as it is only 4 ft (1.22 m)high and 2.5 ft (0.76 m) wide. In fact, nearly 70 temples that he constructed are all Mada Temples where neither an elephant can climb nor there is a door to the Sanctorum; instead, there is a stone window with nine holes through which we can have darshan. These nine holes are said to represent the nine openings in the human body; some believe that they represent the Navagrahas.

When the queen (King’s mother) was pregnant, the palace astrologer suggested a good time to give birth but the queen developed labor pains much earlier. She directed her servants to tie her upside down so that the delivery could be delayed, and she could have a wise and virtuous son who could head the kingdom righteously. As per the astrologer’s suggestion, the child was born at an auspicious time but the waiting time inside the womb made the baby’s eyes red. Hence, he was known as Ko Chengannan (Ko — King, Chengannan— Red-Eyed). He was responsible for building as many as 70 temples.

It is believed that Sri Rama after defeating Ravana has worshipped this temple. Likewise, Sages Agastya, Gowtama, and Parasara had also visited this place. According to the temple authorities, the present temple was built by King Kochengannan (Kochega Chole), one of the Early Cholas, more than 2,000 years ago. Some scholars say that he ruled in 600 BCE, while others maintain that it had been actually 100 BCE/100CE. The Cholas, The Pandyas, and The Hoysalas also contributed magnificently to its upkeep and expansion.

Places To Visit Nearby

Some of the major pilgrim centers of South India-namely, are Thanjavur, Madurai, and Srirangam (Ranganathaswamy).

The best time to visit the temple is during the winter season from November to March. During this time, the weather remains pleasant and favorable for outdoor activities. The temperature ranges from 19°C to 22°C. The climatic conditions during this time are cool and comfortable.

Most of the Resorts, Hotels, Cottages, and Homestays offers budget accommodation in Srirangam.

The nearest station is Tiruchirapalli which is located at a distance of 8 km from the temple and has 2 train stations Tiruchchirapali and Tiruchchirapali Fort. These two connect with towns of South India such as Chennai, Chidambaram, Thanjavur, Madurai, Tirupati, Tuticorin, and Rameswaram. Tiruchi is an important junction on the Southern Railway connecting Chennai, Thanjavur, Madurai, Tirupati, Tuticorin, and Rameswaram.

The nearest airport is Tiruchirapalli which is located at a distance of 15 km from the temple and is around 10 km from Srirangam. Regular flights connect it with Chennai, Banglore, Madurai, Sharjah, Kuwait, and Colombo.