Nanda Devi is the second highest peak in the Indian Garhwal Himalayas and is pinpointed in the Chamoli district of Uttarakhand, between the Rishiganga valley on the west and the Goriganga valley on the east. Nanda Devi is a two-peaked massif mountain that has two summits, forming a 2-kilometer long high ridge and is oriented east-west direction. The western summit is higher which is 7816m (25,643ft) and the eastern summit, called Nanda Devi East, (locally known as Sunanda Devi) which is 7434m (24,389ft). The mountain itself is surrounded by several peaks over a height of 21,000ft, making it a particularly difficult mountain to access. This region has been recognized as one of the most beautiful lands in the mountain ranges and the surrounding dense forest has immense opportunities for adventure.

"The peak Nanda Devi means "Bliss-Giving Goddess" which is considered as the patron goddess of the Uttarakhand Himalayas. The gorge of the Rishi Ganga river and the immediate area around Nanda Devi peak are considered as one among the lesser-known, most inaccessible parts of the Himalayan region."

In acknowledgment of its religious significance and for the protection of its fragile ecosystem, the peak as well as the circle of high mountains surrounding it-—the Nanda Devi Sanctuary—-were closed to both locals and climbers in 1983, and also its surrounding Nanda Devi National Park (also known as Nanda Devi Biosphere Reserve) was declared as a UNESCO World Heritage Site in 1988. It was later expanded and renamed Nanda Devi and Valley of Flowers National Parks in 2005.

Nanda Devi Sanctuary Trek can be entered from Lata village, which is around 28 km from Joshimath. Nanda Devi is surrounded by many mountain peaks from all sides except the west where it is bounded by an inaccessible gorge. Nanda Devi Sanctuary is one of the most popular treks within the Garhwal Himalayan region that takes you to the abode of the sacred Goddess Nanda Devi, idolizing India’s highest peak Nanda Devi which is rising and shining at an altitude of 7,816 meters. The hulking high pyramid peak rising from the gigantic ring of high mountains and with the sacred Garhwal at its backdrop is the major attraction during this trek. This vicinity offers high mountaineering routes and trekking opportunities for all. The Nanda Devi trek passes through the opulent Nanda Devi Sanctuary, an amphitheater of seventy miles in perimeter and stretching to an altitude of 6,000 meters lies adjacent to the Rishi Ganga valley.

The first recorded attempt to venture into the Inner Sanctuary was in 1883 by W. W. Graham, who could proceed only up to Rishi Ganga. Subsequent attempts were made by the explorer Dr. T.G. Longstaff (in 1907) and later by Hugh Ruttledge in 1926, 1927, and 1932 which did not fetch fruitful results. It was in 1934, Eric Shipton and Bill Tilman, with three sherpa companions Angtharkay, Pasang, and Kusang eventually managed to find their way to the inner Sanctuary, thus opening the extensive exploration of the sanctuary. This exploration paved the way for the Anglo-American mountain expedition of 1936 to ultimately climb the peak. When Bill Tilman and Noel Odell reached the top of Nanda Devi on 29th August 1936, through the South Ridge also known as Coxcomb Ridge, which leads relatively directly to the main summit. Bill Tilman and Neol Odell now had reached the highest point ever climbed by man until this height record was broken when a French explorer climbed to the top of Annapurna Mountain peak in Nepal in 1950 – the first 8,000m peak to be climbed by man. The Nanda Devi Sanctuary is drained partially, by the Alaknanda and Saraswati rivers surveying the Wildlife.

From 1965 to 1968, attempts were made by the Central Intelligence Agency (CIA), in cooperation with the Indian Intelligence Bureau (IB), to place a nuclear-powered telemetry relay listening device on the summit of Nanda Devi. This device was designed to intercept telemetry signals from missile test launches conducted in the Xinjiang Province, at a time of relative infancy in China’s missile program. The expedition retreated due to dangerous weather conditions, leaving the device near the summit of Nanda Devi. They returned the next spring to search for the device, which ended without success. As a result of this activity by the CIA, the Sanctuary was closed to foreign expeditions throughout much of the 1960s. After the re-opening of the sanctuary in 1974 to foreign climbers, trekkers, and locals, the delicate ecosystem was soon compromised by firewood cutting, garbage, and grazing. Serious environmental problems were noted as early as 1977, and therefore the sanctuary was closed again in 1983. Nanda Devi Peak remains open from the east side, leading to the standard south ridge route. After a sustained campaign by the local people as reflected in the Nanda Devi Declaration of 2001, the core zone of the Nanda Devi was opened for limited eco-tourism activity in 2003. A maximum number of 500 per season trekkers are now allowed to enter the core zone till Dharansi between the months of May to October. The trek to Nanda Devi National Park starts from the village of Lata, located 28 kilometers upstream from the town of Joshimath on the Niti-Malari highway. 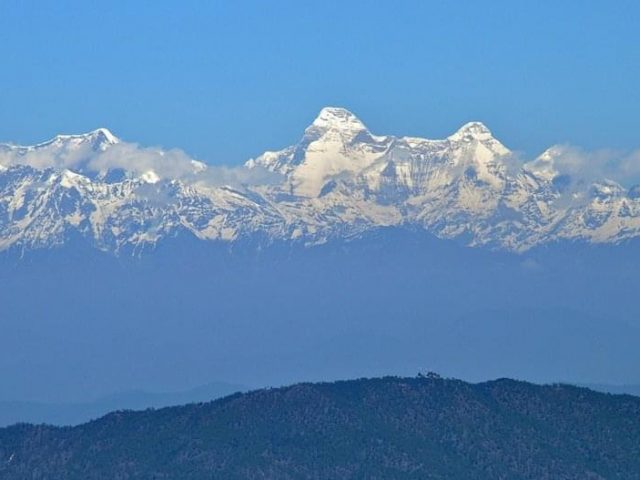 Highlights of the Trek

The best time to visit Nanda Devi National Park and Nanda Devi Sanctuary is from May to October. The weather of Nanda Devi Sanctuary remains salubrious during summer and the Himalayas are distinctly visible. During Monsoons, the greenery of Nanda Devi welcomes the tourist to lose themselves amidst the beauty of nature. There may be chances of a roadblock for a couple of hours due to landslides but the scenic beauty is worth taking the risk. During Spring, Serenity and solitude are at their best at Gaumukh Tapovan.

Most of the Resorts, Hotels, Cottages, and Homestays offers budget accommodation.

Joshimath is 255Km from Rishikesh, 275Km from Haridwar, and 294Km from Dehradun. These four places are well connected through roadways to other parts of Uttarakhand state. Raini is 24.3Km from Joshimath and Lata village is 4.1km from Raini.

Jolly Grant airport Dehradun is the nearest airport 269Km from Joshimath. From Joshimath, one should go trekking for around 30km to reach the Nanda Devi National Park.

From Lata Village, one should go trekking for around 8km to reach the Nanda Devi National Park.