Mahabalipuram or Mamallapuram is a historic city, a UNESCO World Heritage site that is well-preserved to date and speaks volumes of its glory and also an ancient port city within the Kānchipuram district of Tamil Nadu, India. During the reign of the Pallava dynasty, between the 3rd century CE and 7th century CE, famed for their excellent architecture and sculptures, Mahabalipuram has beautiful rock-cut monuments that pull architects, history enthusiasts, and travelers from all over the world. Mahabalipuram is famous for its vast beach, monoliths, stone carvings, and temples and was already a thriving seaport on the Bay of Bengal before this time. A significant amount of coins and other artifacts excavated from this region also indicate a pre-existing trade relation with the Romans even before it became a part of the Pallava Empire.

"Mahabalipuram is one of the oldest cities in India. Present-day, it's known for its great monuments, cave sanctuaries and sculptures. The ancient tradition of stone carving remains alive in Mahabalipuram. We can hear the rhythmic sounds of hammer and chisels even today.  A monument complex at Mahabalipuram, referred to as the Group of Monuments, with all its rock art and relief sculptures, is a UNESCO world heritage site."

During the rule of Mahendravarman I (600 CE – 630 CE), Mahabalipuram began to flourish as a center of art & culture. He was a well-known poet, playwright, and orator and his patronage helped the creation of a number of the city’s most iconic landmarks. This era of artistic excellence was duly continued by his son Narasimhavarman I (630 CE – 680 CE) and subsequent Pallava kings.
The town’s religious center was founded by a 7th-century-CE Hindu Pallava king — Narasimhavarman I, Being one of the best wrestlers and fighters in his realm, the King was also called ‘Mamallan‘ meaning Great Wrestler. Referring to his name ‘Mamallan’ the town was named Mamallapuram. Ancient Chinese, Persian, and Roman coins found at Mamallapuram point to its earlier existence as a seaport. It contains many surviving 7th- and 8th-century Pallava temples and monuments, chief of which are the sculptured rock relief popularly referred to as “Arjuna’s Penance,” or “Descent of the Ganges,” a series of sculptured cave temples, and a Shore temple (Shiva Temple) on the seashore. The town’s Pancha Rathas, or monolithic temples, are the remnants of seven temples, for which the town was referred to as Seven Pagodas. The entire assemblage collectively was designated as a UNESCO World Heritage site in 1984.

Sights To Visit In Mahabalipuram

Sthalasayana Perumal Temple is at Mahabalipuram which is constructed in the Dravidian style of architecture. This temple is glorified within the Divya Prabandha, the early medieval Tamil canon of the Azhwar saints from the 6th–9th century AD. It’s one among the 108 Divyadesam dedicated to Lord Vishnu, who is worshipped as Sthalasayana Perumal, and his consort Lakshmi as Nilamangai Thayar. The temple is believed to have been built by Pallavas, with later contributions from Medieval Cholas, Vijayanagar kings, and Madurai Nayaks.

The Shore Temple is located on the beach and if local lore is to be trusted it’s the one surviving structure of the legendary Seven Pagodas. Despite the continuous erosive effects of the moist and salty sea air, the Shore Temple preserves its beauty in many parts. Built between 700 and 728 CE during the reign of Narasimhavarman II, this is often indeed a remnant of a larger complex of temples and civil structures much of which lies under the depth of the sea now.

DESCENT OF THE GANGES 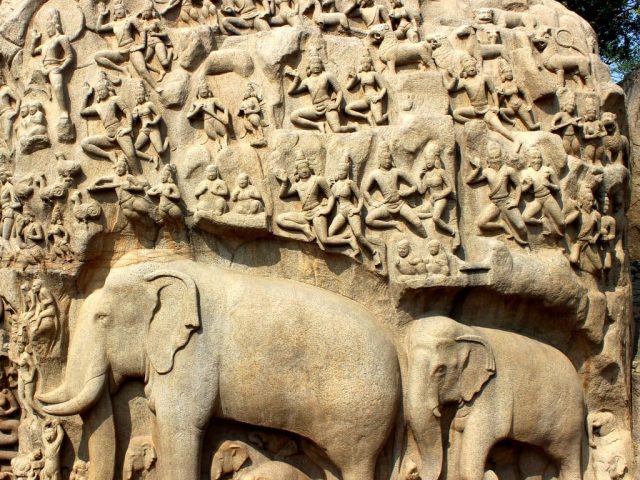 Alternatively known as Arjuna’s Penance, Descent of the Ganges is a gigantic open-air bas-relief sculpted out of pink granite in the world. Arjuna, the epic hero of Mahabharata, is depicted here as a sage doing penance to get the divine weapons from Lord Shiva. All the carvings are made out of an enormous boulder and there’s a natural cleft in the center of the large rock which is conceived as the sacred river Ganga descending to earth. Various divine figures are carved on all the edges. This piece of work is a masterpiece of creation in expression, particularly the figures concerning the favored  Panchatantra stories. This dramatic relief sculpture narrates the tales from Indian epics like the Mahabharata. Nearby mandapas, particularly the Krishna Mandapa, however, showcase scenes of pastoral life amid mythical figures. Other similar rock artworks close by have been left unfinished due to some unexplained reason.

It’s strange to hear that a 250-ton rock boulder referred to as Krishna’s Butterball in Mahabalipuram, stands on a slippery slope of a hill on less than the 4-feet base with a massive 20 feet high and 5-meter wide rock. It’s called Krishna’s butterball because butter is his favorite food and it’s a myth that it falls from heaven. It is also known as ‘Vaanirai Kal’ in Tamil which means ‘Stone of the Sky God’. The position of the rock is so surprising that it looks like it will roll down the slope. But, it stands still firm and tourists can even take shade under it. The Krishna butterball is near the Ganesha Ratha. Pallava kings attempted to maneuver it, but all the kings and their elephants are not able to move the boulder even by an inch. It is Still unmoved even after the place is hit by tsunamis, earthquakes, or cyclones for over 1200 years. 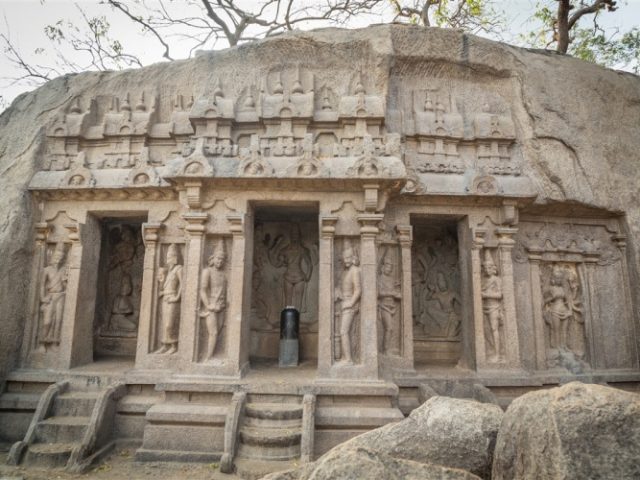 The Trimurti Cave is devoted to the trinity of Brahma, Vishnu, and Maheswara (Shiva) representing the process of creation, sustenance, and destruction. Apart from the deity, the carved pillars and sculptures also show devotees in various postures. The Varaha and Krishna Caves exhibit mythical tales related to Vishnu and Krishna. 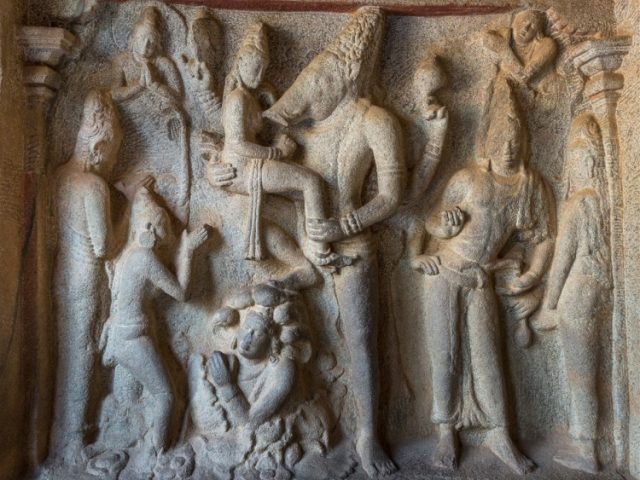 The Adi Varaha Perumal Cave Temple is the earliest of all Pallava structures in Mahabalipuram, yet the least visited one. The grandeur of the particular mandapa (pavilion) is hidden behind a rather ordinary-looking latter-day structure. The development of this site began before the reign of Mahendravarman I. The temple is dedicated to Vishnu (Varaha is an incarnation of Vishnu) and its execution follows the spirit of Vaishnava Agamic texts. Both the outer hall and sanctum sanatorium are adorned with elaborate relief sculptures. This temple houses two relief sculptures of Pallava kings, Simhavishnu (c. 537 CE – 570 CE) and Mahendravarman I, amid their respective wives.

The Mahishasuramardini Cave can be found at a hilltop location. Mahishasuramardini is another name for the goddess Durga who is an incarnation of Shakti (power). She earned this name after the slaying of the demon Mahishasura. This is the second, along with the Kotikal Cave, of the caves dedicated to Durga. 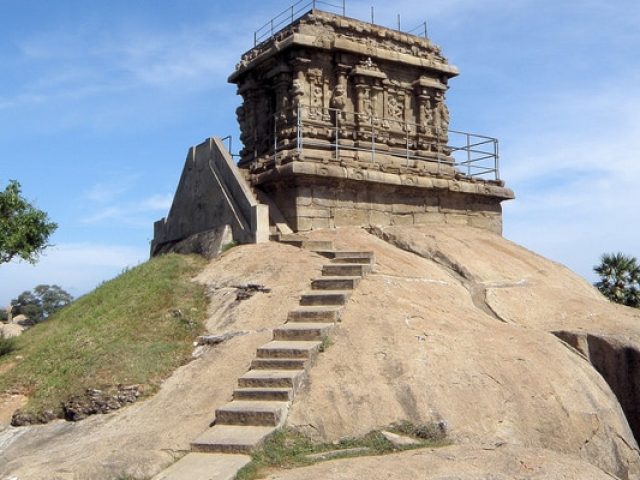 Also referred to as the Olakkanatha Temple, the Olakkanneshvara Temple (Temple of Shiva, implicational of the pineal eye of Shiva) was built about the same time as the Shore Temple. This is located atop a hill, some distance away from the beach which gave birth to a belief that it acted as a lighthouse in earlier times. This is also built atop the Mahishasuramardini Cave, but the two are different structures erected at different times. 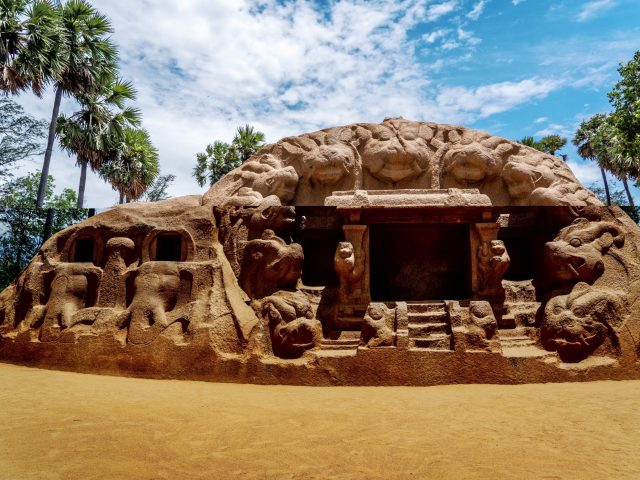 The Tiger Cave is a rock-cut Hindu temple complex and there’s a gorgeous monolithic stage where cultural programs were held in the olden days. Though it is very near to the sea-shore this place is serene and calm. Technically speaking, the Yali or Tiger Cave may not be a geographic fissure, but it boasts a group of most elaborately designed pillars and sculptures depicting several mythical creatures, lions, and tigers. This also features a relief sculpture dedicated to Narasimhavarman II or Rajasimha (700 CE – 728 CE). 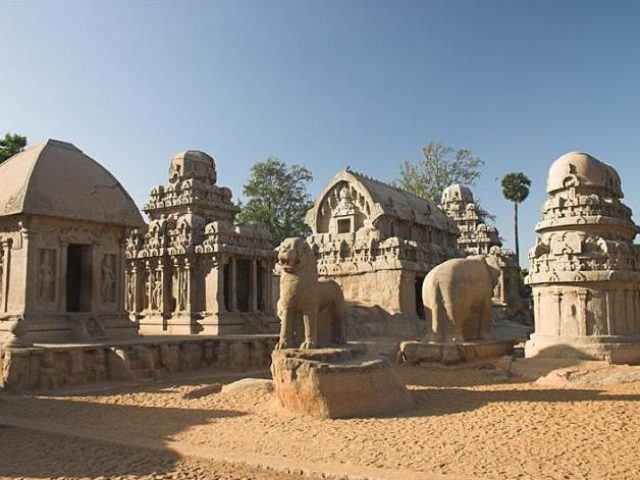 Pancha Rathas (Five chariots) is an architectural model of Mahabharata’s five Pandava brothers Yudhistir, Bhima, Arjuna, Nakula, Sahadeva, and their wife Draupadi. Thematically and structurally, each ratha is significantly different from the other ones, but all of them were carved out of a single rock or monolith. Spread over one to three storey, their forms vary from square to apsidal. The walls of these ancient edifices are decorated with bas-reliefs and murals. A beautifully carved monolithic Airavata (elephant) and Nandi (bull) decorate the premises. Though originally meant to be places of worship, these were never consecrated and used actively for any sacred rites. Arjuna’s Rath has the most lovely and graceful figures of gods and mortals carved by a skillful sculptor. Nakula-Sahadeva Rath stands with a huge Monolithic elephant in front. Bhima’s Rath has two storeys and lion-based pillars. Dharmaraja’s Rath is the biggest and has 8 panels of exquisite sculptures.

The impressive Light House stands on the rocky patches near the Mahabalipuram shore. It can be visited between 9 AM and 5.30 PM by paying a nominal entry fee. On climbing the spiral staircase and reaching the top, a panoramic view of the vast seashore, several rock structures, and the town below can be seen.

The Maritime Heritage Museum is an interesting place to visit. On its display, it has a few working models of the Egyptian papyrus boats, wooden, steel, and diesel ships, maps of ancient sea routes, and detailed information about lights, buoys, and various devices used for communication and navigation purposes. Those curious about marine technology will find a visit to this place informative.

Not many know about the Seashell Museum in Mahabalipuram, which is Asia’s largest seashell museum. The museum has more than 20,000 sorts of shells, conchs, corals, and fossils on display. This beautiful museum features a myriad of shells and conchs of various sizes, shapes, patterns, and stunning colors.

Places To Visit Nearby Mahabalipuram

As this place is situated on the shores of the Bay of Bengal, there will be a moderate and humid climate round the year and the best time to visit this place is during the cooler months of October to March.

Most of the resorts, hotels, cottages, and homestays offer budget accommodation.

Mahabalipuram has located at a distance of 56 km from Chennai and 95 km from Pondicherry.

There are no direct trains available to reach Mahabalipuram. You can cover a part of your journey by train and the nearest station is Chengalapattu, which is around 30 km. After which one must take a bus or a cab to reach this beautiful place.

The nearest airport to Mahabalipuram is Chennai. You can drive from Chennai, hire a cab, or take one of the several buses that shuttle between Chennai and Mahabalipuram which can be reached in under two hours by road.